Rice porridge is not the most popular Jamaican porridge but when it come to taste, it falls in the top category.

How To Make Rice Porridge From Scratch

It is that simple.

What Rice To Use

I usually use white rice to make rice porridge because it easier to cook.

I sometime use brown rice because it’s much healthier but it takes a bit longer to cook.

It’s up to you the type of milk you use.

I use unsweetened plant based milks such as soya milk, almond milk, rice milk.

If you are vegan you can use vegan condensed milk to sweeten the porridge. 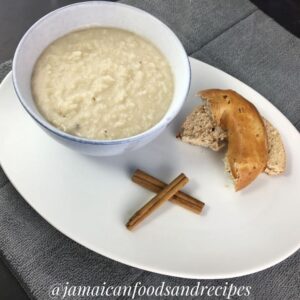 Rice porridge takes a bit longer to cook that cornmeal porridge or plantain porridge but it is just as tasty and a great way to start your morning Jamaican style.
Keyword Jamaican rice porridge recipe