One of Jamaicans favourite dumplings and after you try this recipe it will also be one of your favourite. 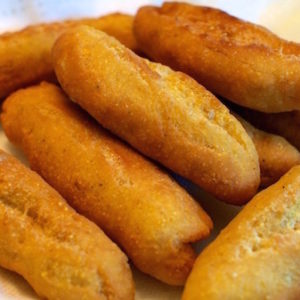 Jamaican festival dumpling are really nice and you’ll love the sweetness and texted of fluffy interior  and the crunchy exterior.  After trying this recipe, you are going to want to try our fired dumpling recipe.
Keyword Jamaican Festival Dumpling

My name is Khaydean and I am the founder of Jamaican foods and recipes. I am a food enthusiast and I am here sharing with you my love for food. Born Jamaican living in the UK and wants the world to learn about Jamaica's culinary culture.

Ital Ackee dish for the vegetarians

Close Menu
error: Content is protected !!
We use cookies to ensure that we give you the best experience on our website. If you continue to use this site we will assume that you are happy with it.OkPrivacy policy